An older fellow wanders up to the pharmacy counter.

After asking him a few questions, he tells me he refuses to see a doctor. Therefore the only advice I have for him is to try some Tylenol. I direct him to pain center area of the store.

A few minutes later he comes back with a tube of hydrocortisone cream and asks me if I think it will help his leg pain. 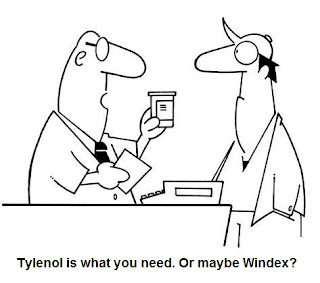 He wanders off. After another few minutes he comes back with a can of Lotrimin spray and asks me if I think it will help his leg pain.

Ten minutes later two women come up to the counter with him. I assume it is his daughter and wife. They start giving me the riot act as to why I would tell this man to get the cream and spray for his leg pain! They don't even give me a chance to respond before they turn around and storm off.
Posted by Crazy RxMan at 4:00 AM

Can't fix stupid. Especially the strain of stupid that seems to be so prevalent among snowflake 'muricans these days.

The problem? It's mixed in with a misguided sense that they are smart with a dash of anti-intellectualism.

You want an example?

The holier-than-thou, bob-cut, Starbucks sipping, anti-vaxxer, soccer mom nitwit that screams at you and demands to see a manager when you tell her that her Xanax Rx is 10 days too early.

Or the hiphop star-wannabe, blasting obnoxious music out of overpriced bluetooth headphones, covered in expensive jewelry and designer clothing topped off with shoes that are more expensive than my entire wardrobe threatening 'I'll see you after work, I'm gonna kill you' while making miscellaneous racial comments simply because my tech explained to him that his welfare had been cut off and that he needed to pay for his Rx's now. Mind you, the tech and I had called Medicaid, knowing he would freak, to see if it was just a glitch. Nope, he had been kicked off of public assistance permanently.

Wait...wife and daughter let man wander around in pharmacy alone? First mistake right there. If I leave my husband, he will come home with the noisiest kid's toy ever made, and play with it. Constantly. Forever. Or until I break it... Thank goodness my hearing is going...