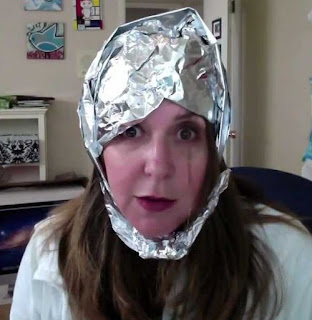 So the tech turns over a call to me yesterday after I hear her say "I'm not sure what you're asking."

The lady picked up a script for Lorazepam that was dated and filled on 9/25. She said it had "written" on the printout "last ordered 9/18."

"What does that mean?" she asked.

I said I had no idea why Mickey would write that on the paperwork and that she could ask him in the morning. An hour later there she is at the counter with her husband. Don't you just love it when people listen to you?

She shows me the printout. There's actually nothing "written" on it. She's referring to the side of the printout which should have been separated from the rest of the printout. It's where we get a small label for our log and another label to manually sign out the prescription if the signature capture device isn't working. There's also a small portion with some inventory info such as quantity on hand.

I tear off that portion and told her how this has nothing to do with her prescription.

"This should have been removed before it was given to you," I tell her.

She quickly snapped it out of my hand like I was trying to hide something from her. I think maybe now we're understanding why she needs Lorazepam. She says she knows it's a controlled substance and never ordered the med before and doesn't want her doctor to think she's had it before.

It took several minutes to try to convince her that it referred to the date that WE, Goofmart Pharmacy, ordered a bottle of Lorazepam from our supplier. I showed her, "See, above that it says QOH-- that's our quantity on hand. The date is the last time WE ordered it."

She left, still grasping the little slip in her hands... and I'm certain she's still not convinced.

Cue wacky conspiracy music...
Posted by Crazy RxMan at 4:00 AM

I would have the exact same concern as her.

Holy unbelievable cow. Some people need to volunteer somewhere so they can fill up their time doing something worthwhile rather than obsessing about dates on the labels and tags.