"Hello, this is Goofmart Pharmacy, where we say 'no way' to a high co-pay. How may I help you?"

"Yes, this is Crazy RxMan." 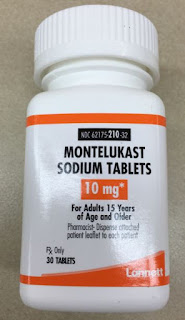 I get the name of the patient and discover that we had changed our generic Singulair to a new manufacturer which comes in a completely different bottle.

"That's a new manufacturer," I tell him. "In fact, We just labeled the bottle it came in. What's the bottle say?"

I'm thinking he'll see the name of the medication on the bottle and realize that everything is cool.

"It says 'montelukast' on the bottle. But the pills look different."

"Was the bottle sealed?"

"Uh, yeah. I had to poke into it to get one out. But it looks different than what I had before. That one came in a different shape bottle that said montelukast."

I had to spend the next five minutes explaining to him that what he has is a completely different manufacturer, right down to the size, shape, and color of the tablet.

It's our fault, really. In a world where you have to warn people that coffee is served hot, you also have to tell people every single time you change a generic. The mere fact that the bottle itself says the name of the drug is inconsequential.

Basically, just assume all patients have no brains, whatsoever, and you're good to go.

Eh, sometimes I like my patients to call about it. When the tablet looks really different (e.g. generic montelukast that's a round tablet instead of the brand-name shape), I want them to call. There's always the chance of a manufacturer's error. For the same reason, I try to tell all my patients when the tabs/caps look noticeably different from their previous fill. I have one patient who only wants brand x generic for a particular med, as it's the smallest tablet available and she has trouble swallowing.

Not necessarily...I got a script for cartia in which the capsules were an orange and the last script were...um, pink I think. Anyway, when I questioned the pharmacist he told me I was mistaken, I insisted, he said I was wrong, I got adamant, and he checked...lo and behold the doctor had changed the mg from 360 to 300.

I'd recently lost over 50 lbs, and he'd lowered the mg accordingly. Of course he should have told me, but he didn't.

So, I was right, the pharmacist was probably eye-rolling and thinking I was nuts, and that's because he thinks all patients are stupid, right?

This is why, when I pick up a script, I always look at the bottle AND the tablets BEFORE I leave the pharmacy. I got the wrong strength of meds just one time but I always check. The pharmacist commended me for it and always opens the bottle for me now.

Just wondering, Crazy, @ Goofmart if you give a partial (11 tabs instead of 90) because of a blatant error on your part do you charge for the 11 & again for the 79 or when the balance is picked up?

Also, if after printing & giving a patient their script w/ the wrong directions (RPH argued w/ me that I was wrong, I wasn't and he hand corrected it but not in the computer) when the balance came in do you correct the directions or do you have to leave them the same because it needs to match the partial?

Would love some feedback! This is not not my reg pharmacy I just use it for acute scripts due to distance but both pharmacies are given lists of all my meds! And, when I fill something acutely I let my regular RPH know what I filled acutely!

It depends on store policy and the insurance used. If it is a Medicare part D plan, you can not charge until the full quantity is picked up. In other words there should be no charge for a partial but full payment is expected when it is picked up. Most pharmacies adopt that as their protocol.

Some pharmacies charge the full amount with the partial then no charge when the balance is picked up. That's not legal if it is Med D, but some still do that.

Suppose the wrong quantity was submitted, paid for, and picked up. Then a mistake was discovered. The pharmacy is obligated to rebill and give the remaining balance or a refund if due.

I did make a quantity mistake one time and asked the patient to pay the difference for the higher quantity. She felt like since I made a mistake that she shouldn't have to pay the difference. I think she was just taking advantage of the situation but The Authorities took her side. As I recall, they even threw a gift card in for horrible fact that she had to drive back a whole 1.2 miles to get it straightened out.

I hope this answers your question.

I work for a large national chain, and our policy is to dispense a 5 day's supply. When we partial fill it, the insurance determines the partial copay (sometimes it's the same as full full. Other times, it's a fraction of original copay. Pt will pay balance of full copay when they pick up completion where applicable