It all started with a Tweet about a zero co-pay for birth control: 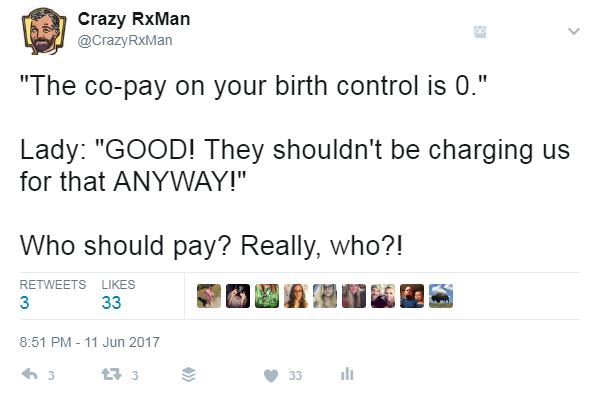 It ended with a condescending rant from Drug Monkey.

In one corner we have people like me who see the abuses of Medicaid on a daily basis... people who have been on Medicaid for years, and years, and years, and yet never seem to better their lives, and other people driving a Lexus or Mercedes, holding an iPad and Starbucks in their hand as they pick up their free or nearly free medication each month, paid for by you and me, the taxpayers.

Pharmacists and pharmacy technicians SEE IT every day because we're on the front lines and witness it. And there's no mistake abuse IS happening (see this LINK and this LINK). Oh I've seen people get into financial trouble, get government assistance, and pull themselves out of the hole. And the system was designed to help these people. But there are just so many others that abuse it. And quite frankly, I'm tired of it.

In the other corner you have socialists, those that want government to oversee every aspect of our lives, tax us to death, and redistribute wealth from those who earn more money to those that earn less. Along with this, these people have somehow lumped in "healthcare" as a "right" along with "Life, Liberty, and the Pursuit of Happiness." News flash: Healthcare is NOT a right. Sorry. (See LINK).

What happened to personal responsibility? What happened to earning your own way in this world? What makes people believe that somehow it's ok to take money out of my pocket and put it into your pocket? If I earn more than you, somehow it's greedy for me to want to keep what I earned? But it's NOT greedy for you to want to take it out of my pocket? What kind of nonsense is this? 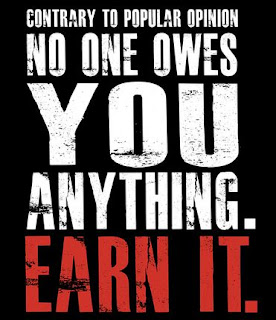 These are dangerous times. The days of Walter Cronkite are over. You really can't trust what you see on CNN or FoxNews anymore. Washed-up comedians pretend to behead the president and present it as "humor." Somehow the Russians made us pick Trump last November. Mechanical Engineers pretend to be climate and gender experts. Data is faked to promote the idea that we're in serious danger of having our coastal cities drowning in a few years. (Gosh, I remember, what was it, ten years ago when Al Gore was trying to convince everyone the polar ice caps would be gone by 2013 -- See LINK). 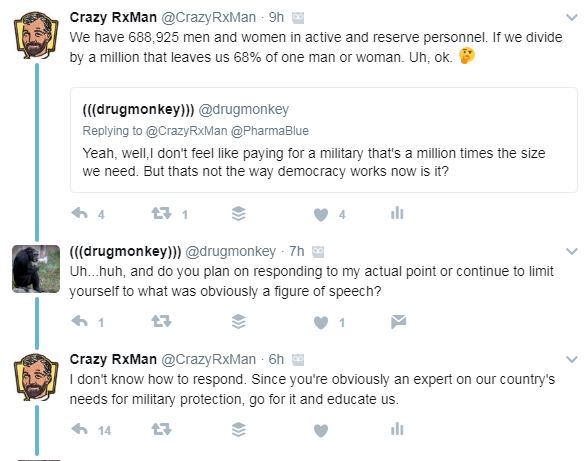 ...when you ask for a real answer, instead you get insults and put downs. As is typical of the far left, the usual way to make your point is not with real science, numbers, or figures, but rather by beat-downs, condescension, and insults... which is exactly the tactic by Drug Monkey:

I asked him to educate us on what he meant by decreasing our military. Instead I received a condescending lecture on how democracy works.

God help us all.

The Toxicity of Medicaid

We spend over a trillion dollars a year on government provided health care.

Birth control shouldn't just be free, it should be required. We don't need any more of them. I'm all for anything that can keep them from reproducing.

the thing is, due to the recent laws and such its now being offered for a $0.00 copay or relatively cheap.

now there are "men" that dont want coverage for this on their insurance because theyll never need birth control and are advocating that this be taken off their policy.

besides the fact that this would be mere pennies compared to the premium they already pay, do you really think any insurance plan would reduce their premium rates for taking this off their policy?

Crazy, I know that you're sensible and my following comments are only a reminder and some information for your readers. Health Care is more complicated than paying for free birth control (which is outrageous), and for others who won't help themselves, or purposely scam the system. I've seen plenty of abuses, and they are infuriating. Many people on government aid can eventually find a job and end their complete dependence on the government. However, some of the mentally ill can not. Because of an illness that they didn't ask for, or did nothing to get, some will never be able to function normally and will need government aid for their lifetimes. I know a young woman with Congestive Heart Failure, who will never be able to work again. We can't complain about the mentally ill (unless some complainers are too ignorant/arrogant and believe in a stigma)or one with non-treatable CHF. These are exceptions to the abusers.

Any pharmacist that hasn't been jaded by the abuse by people on Medicaid probably isn't a real pharmacist.