But this is what I have observed since 2004:

* A huge increase in the number of prescriptions written for narcotics.

* We used to only stock hydrocodone/APAP in 5/325 and oxycodone 5/325. Now we stock multiple strengths of both to keep up with multiple prescriptions.

* We used to only stock oxycodone 30mg. Now we stock all strengths in large numbers to keep up with demand.

* I see an ever-increasing number of prescriptions for Norco for discomfort associated with coughing from respiratory illnesses.

* I also see an ever-increasing number of prescriptions for narcotics for routine dental procedures. (I was given Tylenol when I had my wisdom teeth out years ago).

* An ever-increasing number of prescriptions for Oxycontin (a twelve hour medication) written to take every eight hours.

* Methadone used much more frequently for the treatment of pain.

* Very few attempts to switch patients from short-acting narcotics (like oxycodone) to fentanyl patches or Oxycontin. 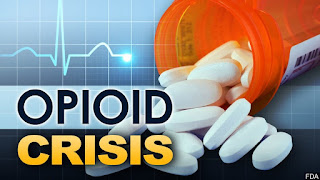 So from MY perspective, we're in an opioid crisis. It seems pretty clear to me unless things are vastly different at every other pharmacy in the country. I'm not pointing fingers or suggesting who is to blame.

I'm just observing.
Posted by Crazy RxMan at 4:00 AM

Every time my husband injures himself he seems to be offered opioid. Simple wrist fracture, minor burn (chemical so we saw a doctor), sprained ankle. He didn't know what was being offered, and when I turned them down on his behalf I was chastised.
He now only accepts Tylenol, which has so far worked with all these minor injuries.

15 years ago when I broke my wrist I was offered Tylenol, elbow I was offered a single codeine tablet while waiting for the surgery, Tylenol thereafter. Goodness last tonsillitis that offered morphine. Tylenol was fine.

It all started in the late 90's with Joint Commissions Pain as a "vital sign" push. I said it then and I will say it now. People have pain for a reason to keep them from ssuhing themselves when they need to be heeling. Now, I also dont believe in someone being in agony but a 48 hr post surgical prescription should be plenty for most surgeries.

a potential side effect: Are more pharmacies being robbed since they are stocking more opiods?

I don't like taking narcotics. They take away what little mind I have left. But, for surgery, the script for some Norco or oxycodone is filled. I only need 3-5 of the script, but I DO need them.

About two years ago, I had a car accident, and really messed up my hand. REquired two operations to fix, and I had sent the unused Rx of Norco from the first surgery to the police reclaim box. So I filled the second Rx. Pharmacist was very suspiciou and rude, implying I was a "drug seeker." (Well, I was. Just for properly prescribed meds.)

I understand the need to rein in some opioid use, but please remember that patients are scared and in pain.

Once the marketing began lots if crooked Docs began CASH ONLY practices selling prescriptions for whatever patient asked for. DEA didn't seem to care for years, but began a crackdown I noticed a year or so ago.

As a hospital physician I'm dumbfounded when patients demand IV Dilaudid for an ankle sprain. I advise ibuprofen and ice. I'm sure my patient satisfaction scorecard looks awful. We need to do away with satisfaction surveys that ask patients to score their pain treatment. The hospital administration wants good scores.

The hospital nurses STILL ask every patient, at every assessment, to score their pain. (Happy face? Sad face?) I get dozens of calls from nurses every day for stronger (ie opiate) pain medications. I'm sure the nurses think that I'm an evil doctor for ordering ibuprofen.

Hydrocodone is quite good for a severe viral respiratory infection. Used sparingly. Like a half tablet twice a day for a day or two.

Do you know what seems to work amazingly well for pain? Ben Gay. It's probably totally placebo. But the patients feel like it's doing something. And they smell better too.

Over 30 years ago, when a customer brought in a prescription for a C-II narcotic, we would do whatever it took to fill the prescription, because we knew they really needed it. We would move heaven and earth. Now I feel so cynical, so jaded. Now we look for reasons to refuse the prescription because there are so many abusers and resellers out there. Sad. How to put the genie back in the bottle? It will be very hard to do.

Who are you magical people for whom tylenol has some effect? I also refuse narcotic pain medication and just deal with the pain but taking a tylenol for me is the equivalent of taking a skittle.

Anonymous doctor above. I am one of those nurses calling for pain meds. Just as happy when you say 'no'. Pt's give us hell if we don't call, and really, it isn't legally our decision to make. Sorry if that makes you look like the bad guy, but that's your job, to make medication decisions. Not mine.
Many of our hospitalists are trying hard to limit opioid use, and as nurses we pretty much back that up. I am not happy giving multiple opioids to many of my patients.
I have started using ice packs a lot more this last year. Many patients are perfectly happy with that, and can skip an opioid dose. We get opioids prescribed for headaches. An ice pack behind the neck usually works better.

Wrecked a motorcyle (flipped at hwy speed), went to the ER, got an x-ray, nothing broken but the shoulder was done for a few months.

RODE HOME WITH MY BUDDY ON HIS GOLDWING AND NO MEDS.

Had various wrecks after that, no meds.

Crash landed and bounced during a skydive (down-wind hook-turn landing under canopy). NO MEDS. Ankle had a nasty sprain.

I did however, eagerly ingest morphine after my vasectomy.