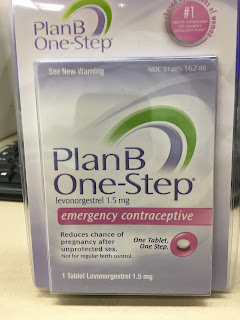 Another round of Plan B for Miss Loosey, my local celebrity-wannabe that came rushing into the pharmacy the other night.

"Put it on my insurance," she said.

Side note: Do we really have to call Medicaid plans "insurance" anymore? The word insurance implies that it's something a person pays for to keep from having larger costs later. Medicaid is free to those who have it. I really detest calling it "insurance." I pay for my insurance. Medicaid patients are hosted by the Taxpayers.

"Do you have a prescription for it?" I ask, already knowing the answer.

"Not in this state," I said. I really have no idea if pharmacists can prescribe it anywhere else, but I'm sure that's coming some day.

"Healthcare is a RIGHT," she lectures me. "I shouldn't have to pay for this."

"Healthcare is a commodity," I reply, knowing full well she has no idea what I just said. Life, liberty, the Pursuit of Happiness, and Healthcare? One of these things is not like the others... the Sesame Street song starts rolling in my head. 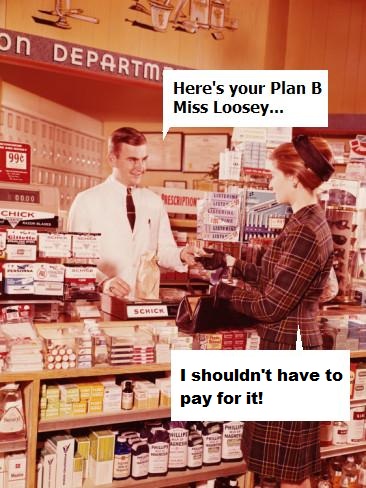 Miss Loosey pays for the Plan B and asks me to open the package for her. She intends to take it right there right now. I tell her she can just take it at home. The extra time won't matter that much.

"You know I can't take this home. My husband would see."

I open the package. She quickly swallows the tablet.

"By the way, condoms are on aisle five, in case you wanted to get some on your way out."

She rolls her eyes. "Ha ha ha," she says, sarcastically.
Posted by Crazy RxMan at 4:00 AM

pharmacists can prescribe it in Canada

I have a very slight problem with this, and it's how you tread Medicaid.

I'm currently on Medicaid. I wish I weren't because it does not cover my psychiatrist (for GAD), but it does cover my drugs. (Citalopram 40 mg, if you're wondering).

I was caught in a position where I was a part-time student and worked somewhere that did not give medical benefits and paid low enough that my state gave me Medicaid. I wanted to buy insurance but the state wouldn't let me. The penalty for being without insurance was more than I would spend.

Wow..shaming a woman for taking a morning after pill and implying she is a whore (with a name like loosey). I enjoy your memes but this is distasteful. Also shaming medicare recipients..nice!

If you have been following Crazy Rxman for awhile, you'd know Miss Loosey is a regular patient of his that has been on Medicaid (not Medicare; there's a big difference) for a long time. The title, "needs MORE Plan B" is because this isn't the first time she's fooled around on her husband, and yep, that's kinda whore-like behavior. I think Crazy named her that because she deserves it.

Perhaps if there was m ore shaming involved with people that take advantage of Medicaid there wouldn't be the abuse that's out there. As a pharmacist myself I see it every damn day. People driving a Lexus or Caddy living in $500,000 homes and we pay for their medications. Or people who have been on Medicaid programs for 10 years and have done nothing to get a job or improve their earning potential.