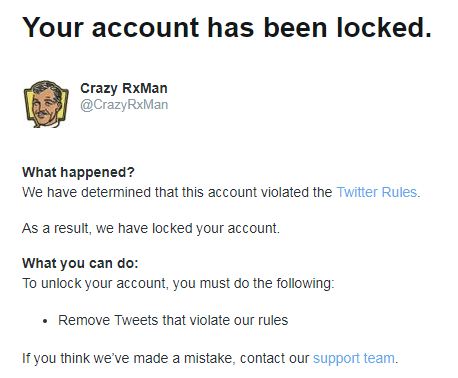 What crime did I commit? Humor. On Twitter, you're not allowed to be funny if you're Conservative. Oh, you can say anything you want about Trump and his family, but don't you dare try to be funny if the target of your joke is a Liberal or Leftist.

I removed the tweet. But that doesn't change the FACT that it's still funny: 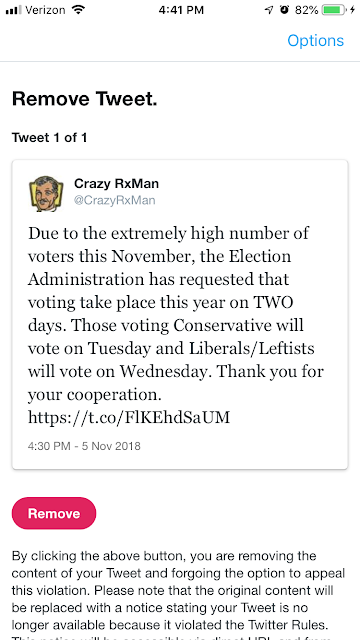 I've been on Twitter a number of years. I've seen things in my Twitter feed that would just astound you in terms of vulgarity and inappropriateness. Just recently I saw a tweet which showed a video of boy, maybe nine or ten years old, pulling down his pants and penetrating a chicken with his penis. I couldn't hit the complain and block buttons fast enough, but it occurred to me that if I was seeing this tweet, plenty of other people were too and complaining about it as well. Why wasn't it taken off faster?

I removed my offensive tweet, but I don't apologize for it being funny. If you've got a problem with that, I invite you to unfollow me or mute me or block me. I really don't care. I'm going to continue to be funny.

Sorry, I didn't think your tweet was funny. But I also didn't think it was the least bit offensive. I wonder if a person decided it was problematic or some algorithm did? In any case, they have serious problems applying their rules equitably.

I DID think it was funny, and I consider myself a leftist/liberal. Why can we no longer laugh at ourselves.

Have to agree with Twitter on this one. It's called voter supression: https://www.washingtonpost.com/technology/2018/11/02/how-facebook-twitter-are-rushing-stop-voter-suppression-online-midterm-election/?noredirect=on&utm_term=.bdf3dfb1e886

It's called a joke, not voter suppression.

If someone read that and didn't vote on election day because they thought it was real, that person shouldn't be voting anyway.

I am a Liberal and I thought it was funny! People need to keep their sense of humor intact.

I thought it was funny, but just before an election peddling incorrect information was the issue, not the joke. USA (and many other countries!) does have issues with voter suppression.

Would have been good to test the reverse of it though, and make sure the ban was consistent.