Natalie Norco was here again, just 21 days after she saw her "doctor" at the "pain management clinic." The doc must have conveniently overlooked her chart since he wrote another 30 day supply of medication for Norco 10/325.

I told Natalie it was too early for her Norco since we had just filled it 21 days ago. She said that I should call the doctor because he said it was ok when she was in her office. I called "The Center for Strategic Management of Skeletal Pain" (don't you just love the fancy names for a prescription mill?), was put on hold twice, and finally put through to the doc's assistant.

"What can I help you with?" she asked. 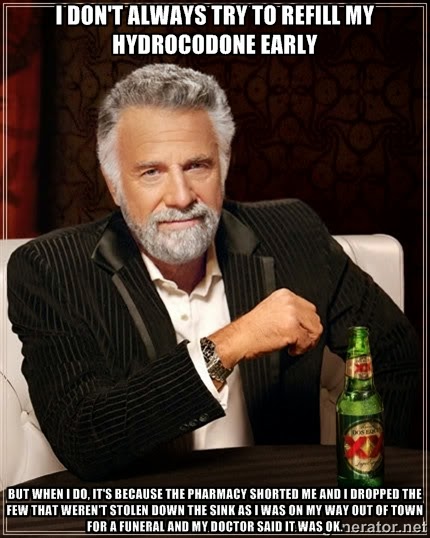 I explained the situation. It's on day 21 of a 30 day supply and here's Natalie with another Rx for a 30 day supply from your office. I told the lady that I need to talk to the doc. I politely explain to her that typed on on the prescription itself is part of the "pain contract" and that it says NO EARLY REFILLS.

"Why do you need to talk to the doctor?" she asked.

"Because HE wrote the prescription. He's written 1 QID and after that, 'Take 1 tablet five times daily.' I need some clarification from the source," I replied.

"He's with a patient right now, but I'll have him call you."

Natalie returns and wants to know why we don't have her Norco ready. Upon telling her that we're waiting to hear back, she gets upset and calls the office from her cell phone. I get busy with other patients and then she's gone. Natalie Norco is nowhere near.

Ten minutes later the doctor's assistant calls back, says it is supposed to be one tablet five times daily but not to fill it until 30 days past the last fill. Ok, I can do that.

Ten minutes after that the doctor himself finally calls me back. I tell him that I just talked to his assistant but he wants to talk about it some more. Now he's changing it to 1 QID and then confirms again that I'm not to fill it until after the 30 days have passed from the last prescription.

I hang up the phone with the doc and the technician informs me that Natalie is waiting on line two to talk to me. I pick up the phone...

"Crazy, I just spoke with the doctor! He said it was ok to get it filled today!"

"Natalie, that's really odd. I just got off the phone with the doctor myself. He told me not to fill the prescription until 30 days past your last fill. He said you should have plenty of medication at home from the last fill date, so I can't fill it until..."

I feel badly for you. The local pain clinic here even gets the 28 & 31 day months right! No early refills. It's the ER scripts that are always a problem... and I always wonder how someone with "no insurance" can afford to go to the ER for a prescription.