There is a shift taking place in our society. As more and more people shift from being productive members of our society to ones who depend on the working class for their welfare and medication, an attitude is beginning to surface. The attitude is very strong among people on Medicaid in my area, and every year I see it getting worse.

A new prescription for a patient comes in via e-script. We attempt to adjudicate a claim to our state-funded Medicaid program. It returns a rejected: NDC not covered. I'm not surprised. It's for Restasis. The rejected claim also says something about using the OTC product Artificial Tears.

As a courtesy to the patient, we fax over a "prior authorization" form to the doctor. Maybe the patient already has a failed history of using Artificial Tears, or perhaps there is another reason the patient must have Restasis. Who knows? But at this point the only way the claim will process is after the doctor calls the insurance. I've seen $1.50 aspirin covered by Medicaid. I've seen Accutane covered by Medicaid. Maybe they'll cover this one?

The patient shows up. We tell her the situation about the prior authorization and how we're waiting to hear back from the doctor. Whoosh. She didn't understand.

"But my doctor authorized it. He wrote the prescription!"

I try to explain again, this time going from start to finish. I have a whole little spiel for people unaware of what "prior authorization" means:

"When we sent off your prescription electronically for payment, your insurance asked for a 'prior authorization' because this medication isn't on your insurance's list of medications they pay for. This means the insurance wants to talk to your doctor before they will decide whether to pay for it or not. We have faxed over the forms to the doctor and we're waiting to hear back now."

I've said this so many times over the years it just rattles off my tongue now without even thinking about it.

"I'm going to call my doctor! He wrote the prescription! Didn't you get a prescription? He authorized it! I'll call him right now."

I ask the tech to give the lady the prior authorization form. I tell the tech the lady is going to handle it now. The lady takes the form, moves to the side of the pharmacy, and pulls out her Obama cell phone to call the doctor.

She starts talking to the office staff. I didn't pay much attention to what she was saying, but I did hear her say the following:

"I'm here at Goofmart Pharmacy surrounded by a bunch of retards."

I look at the tech and ask her, "Did I just hear her say what I think I heard her say?"

Yes I did, she tells me.

And there you have it, folks, more of the entitlement attitude I'm talking about. Here's what we've learned today:

If you're on Medicaid:

1. When the doctor writes a prescription, it should ALWAYS be covered simply because he/she wrote a prescription.
2. Cost containment policy and procedure doesn't apply to you.
3. If the pharmacist and technician doesn't understand 1. or 2., they're "retards." 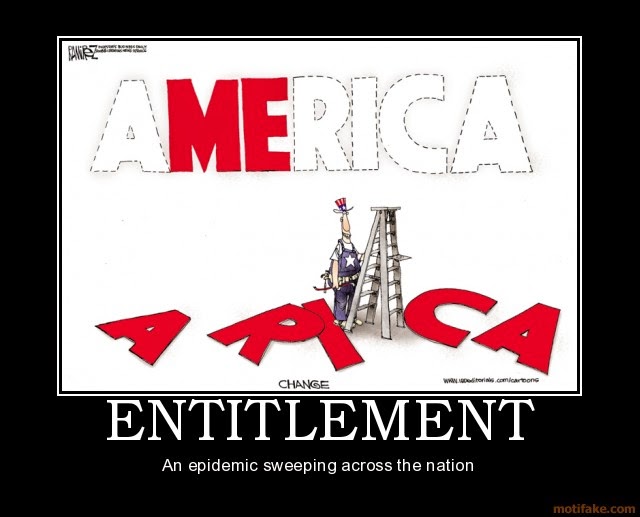 'I'm sorry ma'm. I cannot honor your prescription. I suggest you take it across town and start the entire process over.'

The other part of the equation is that our entire medical system is run by insurance companies not people that understand medicine.

Insurance companies might not need to get involved is all of us healthcare professionals properly contained costs ourselves. I still fill prescriptions written by doctors and asked for by patients for brand only when their is no medial necessity. the patient will say it only costs me ten dollars more than the generic I want the brand. He has no concern that it costs the insurance company over 500.00 more..We need to not give into the patient and write daw to get them out of our office faster. We need to not give in and write for prilosec when tums will do. We need to not order expensive tests when we are just placating a patient rather than using our medical skills to determine the cause. Now some healthcare practitioners do try to contain costs and only order the expensive stuff when absolutely needed, but we brought a lot of this on ourselves.

Even socialised medicine is run by insurance. To contain costs the (provincial) goverment has lists of which medications they do or do not cover and under which specific circumstance. In fact, i'm sure that we share the same bureaucratic nightmares on each side of the border

It's not just you. We have highly entitled patients in Canada too.

Her Escalade was probably parked in a fire lane running and she was in a hurry so she wouldnt get a ticket. The lower the class the more entitled they feel. disgusting

I use the Snickers analogy... "If your doctor wrote a prescription for a Snickers candy bar, do you think your insurance would cover it?"