The Emasculation of Man is Complete

Dr. Heathcliff Huxtable (Bill Cosby) -- The obstetrician/patriarch marked an evolution in what men were like on TV. Obviously accomplished professionally and a consummate family man, he could often look somewhat befuddled — he didn't have all the answers. His lawyer wife sometimes talked him through a situation.

Tim Taylor (Tim Allen), Home Improvement -- "More power," he'd growl, trying to sustain a standard for manly men who love sports and tools and working with their hands — while trying not too hard to work with their minds. The show touched a zeitgeist-y little nerve amidst the first push back by some men to re-establish or re-define manhood.

In the end, however, I always looked at the show as Tim Taylor having to apologize to his wife in almost every episode.

Ray Barone (Ray Romano), Everybody Loves Raymond -- The sportswriter could act like he was 40 going on 14. In his role as family man, Ray seemed more interested only in steering clear of his relatives and their conflicts and peccadilloes. He'd only act like a loyal, loving partner to wife Debra when push came to shove — so his parents and brother, who lived across the street, ran amok. Boundaries, people! Father, in this case, didn't know best.

AND WHAT has been the result of this media brainwashing? What shows the proof that men are no longer men, in addition to lower sperm counts and metrosexuals?

That's right! Bronies PROVE completely that the emasculation of man is complete! But what are Bronies, you might ask? Oh, tsk tsk tsk, you will shake your head after hearing this one...

My Little Pony: Friendship Is Magic is an animated television series produced by Hasbro as part of its My Little Pony toy franchise, which is tied in with the 2010 launch of dolls and playsets, and original programming for U.S. cable channel Hub Network (formerly The Hub). The show received praise from television critics and parental groups. It also found an unlikely audience in a large group of Internet users in late 2010 and early 2011. These older fans, typically males from 18 to 35, were drawn to the show's characters, stories, animation style, and influence of the show's propagation as an Internet meme. The fandom adopted the name brony (plural bronies), a portmanteau of "bro" and "pony". Though initially considered to propagate the humorous and ironic concept of grown men enjoying a show for young girls, the fandom has shown deeper appreciation for the show far beyond this concept, and is considered part of a New Sincerity trend. Its technology-savvy members have created numerous works in writing, music, art, and video based on the show, have established websites and fan conventions for the show, and have participated in charitable events around the show and those that create it. 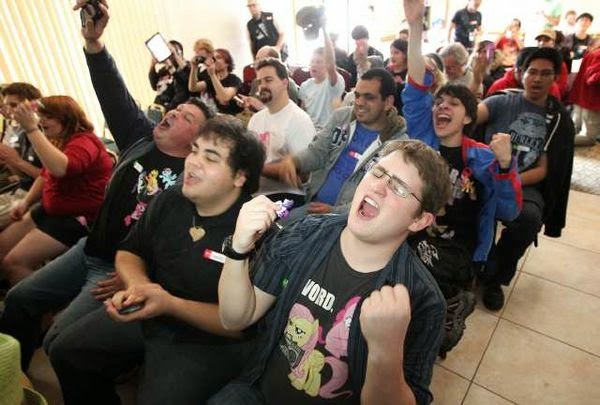 So this is the future of the male gender? Collecting and playing with little pink ponies? Men who sing the praises of "If you try to please everypony, you oftentimes end up pleasing nopony.”

This is sad on so many levels. Perhaps this is what the driving force is for the current fad of testosterone replacement therapy - the realization that you are un-naturally attracted to this genre of entertainment.

Please tell me you copied and pasted this in such a hurry you didn't read it.

"So this is the future of the , ,mail , gender? Collecting and playing with little pink ponies? Men who sing the praises of..."


Because I want to believe you know it should be MALE.

So... you're saying that men being... more sensitive is... some how a bad thing? You would like to go back to the days of father knows best, where the role of a woman was merely to ensure that food is on the table, to look pretty and care for the kids?

I seriously do not see what your issue here is.

Unless you're just sitting there going "oh, that's a GIRLS TV show, BOYS shouldn't like it, and MEN should have some sort of allergic reaction to the show"... at which point, shame on you.

Women shouldn't be shamed for liking a thing. Neither should men.

If a woman were obsessed with a cartoon made for 6 year old boys then yes.... yes she should be shamed. You don't see BIG groups of women gathering to watch power rangers dressed in show merchandise. They don't cry, cheer, and sing with the characters. They don't claim to learn 'life lessons' from a children's show. They don't fist bump strangers for having a power rangers T shirt. That would be stupid....

So is grown ass men being emotionally involved in a cartoon meant for preschoolers.

I don't get it. How does this affect you? Are you trying to come out to us as a Brony?

While you're talking about grown men, younger boys are involved in this fad too, and face bullying for it thanks to this same sense of machismo-- there was a widely publicized suicide attempt by an 11yo boy this year for this very reason.

Maybe you think the problem is strictly with adult male fans and that boys should grow out of it, but it's really the same thing to tell a boy or a man that he's not masculine enough for your standards. The bullies are the ones that should grow out of their immature behavior, before they reach your age. I'm not suggesting that you've been harsh enough to motivate a child to attempt suicide, but this kind of disparaging attitude does real harm.

I agree that they look quite silly, but I also have mad respect for someone who indulges in silliness when it's fun. Maybe you shouldn't knock it 'til you've tried it.