This is a story I heard from a good friend of mine who works for a Goofmart Pharmacy in another state.

So the story goes that a lady wanted an early refill on her narcotics... to the tune of two weeks early. Neither the pharmacy manager or the staff pharmacist at the Goofmart Pharmacy in question would fill the medication.

The lady complained to the corporate office. Phone calls made their way to the Pharmacy Director. He immediately called the store and told the pharmacists that they needed to fill the medication for the lady. After all, laws be damned, patient safety be damned, we're NOT going to entertain a customer complaint. No way, no how. 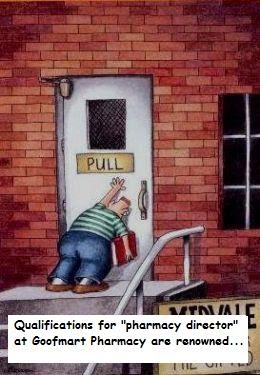 The Pharmacy Director, in charge of dozens of pharmacies in the state, drove to the pharmacy in question (a good 50 miles) and filled the prescription himself. Tons of work to do, people to manage, pharmacies with serious tech needs to ignore, Excel spreadsheets to comb over and find fault with, but nooooo, this Director was going to make sure ONE disgruntled customer obtained her early narcotic refill.

For those few readers that just don't get what the problem is here, let me explain it to you:

1. The director should have stood behind these pharmacists. I don't know the reason why they refused to fill the medication, but I have no doubt it was a dandy reason. We don't refuse service to patients without good reason.

2. The director should not have taken the time to take care of this personally. The director has a job, and that's directing. It's not filling. If he felt like it really had to be done, he should have sent a regional manager or one of his brown-nosers to do it.

3. This sends an entirely wrong message to the public. If you complain enough, you get your way with Goofmart Pharmacy whether your're right or wrong. This is yet another example of that "the customer is always right" drivel from the 1950s.
Posted by Crazy RxMan at 4:00 AM

And yet my insurance makes it difficult for me to get my Synthroid a week early so I can go on vacation. Sigh.

Please tell me the director got his ass handed to him for violating state law!

Wouldn't it have been simpler to just get the prescriber involved and let them make the decision whether or not an early fill of the medication was warranted for this patient? After all, isn't this the appropriate health care professional to make this judgement call in a scenario like this? Then, if the prescriber said "no" to the early fill, there would be nothing the pharmacy director could do about it. And if the insurer denies the claim on the early fill, then the patient has to pay full price for it. I see no problem with this if the prescriber is aware of the patient's usage of the product. Unless the pharmacists have witnessed the patient selling the medication in their parking lot, then I find it hard to believe the prescriber would be OK with this.

It's very discouraging when your superiors undermine your judgement instead of have your back. Especially in a situation like this. If the patient doesn't like the state law then they should have been advised to go tell their legislators about it.

Could this guy have been reported to the state's BOP? I'm not real sure how that works, if it's like the medical boards or not. Of course if they did report him that would have probably been the end of their careers with that company.

There seem to be many folks who take pain meds or benzodiazepines who take trips nearly every month. We have made it known that we will not fill early even for "I'll pay cash" unless the doctor okays it. It's after hours? No problem, we will page. We recently had a gal whose doc ok'd an early refill for Xanax. A week later the office called after they had run a PDMP report. Seems the pt got 300 Xanax in a month. Hope the pharmacy director does not mind having the morgue call him when they find Goofmarts rx bottle in the wreckage. (This has happened to us!) But at least he got an A+ in customer service.