A lady came by on Tuesday to ask if we have Shingrix. I said no, but we’re getting some on Friday. "Come in on Saturday — there’s no wait," I said...

She stops back in 15 minutes.

She wants to make sure. I said yes.

She calls an hour later to ask Flynn the tech to write her name down for two shots: her and her husband. He tells her no problem.

Wednesday she calls to make sure we’re going to hold two shots for her. I said yes, of course. She wants to know if she will have to get a third booster because Saturday will be six months and a day and she was told two to six months for the booster. I tell her it’s only a day and not to worry about it.

Thursday she called and spoke to Mickey the manager. He assured her we would save two shots for her and her husband.

Friday she calls in the morning to check if we received our shipment. Flynn the tech confirms it and that we will definitely hold two shots for her and her husband.

Friday she shows up at 5pm when we’re in complete dinner hour chaos and says they’re there to get their shots.

She says, "But tomorrow will be past six months. I have to have it today. And I don't want you to run out."

I’m quite perturbed now. The demon inside me is ready to appear. I’m trying to fill like forty-three prescriptions at the same time when this nut job shows up when we’re going crazy.

Flynn tries to work with her insurance. Our “don’t you just love it” software has some flaws when you’re inputting insurance info. I end up calling the insurance company to verify the info. We have the right info but because it was entered slightly incorrect the first time it won’t let you change it. It keeps telling you that you already put it in. Even if you delete the info and start fresh it tells you that it’s already in there. It's a huge bug with the new software.

The lady sees I’m upset and asks Flynn, “Is he going to hurt me since he’s mad?” 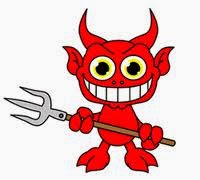 “Did you really just ask that? I’m a healthcare professional!”

She says she was just kidding.

Flynn puts it on a discount card and we plan to just figure out the insurance later since we're swamped. While he’s been fussing with the software I’ve been filling scripts like mad.

I get the shots ready and ask, "Who’s first?"

She decides to go first.

"Ok, YOU stand aside while YOU figure it out. Let me do your husband's shot."

Then she makes her husband go in the room with her and hold her hand.

Euthanize me. Seriously. I don't even care if it's painful. Anything is better than this.
Posted by Crazy RxMan at 4:00 AM 1 comment: