A Stab in the Back 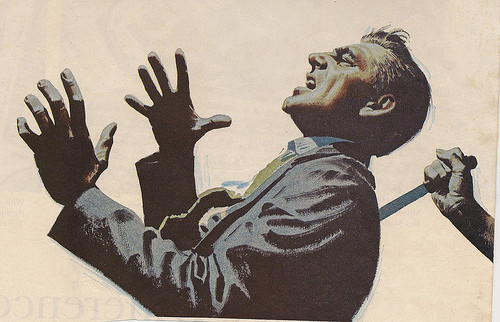 In many states all across the nation, national pharmacy chains have reduced their pharmacists' hourly wage. But by far the biggest thing happening is that pharmacist hours are being reduced from 40 hours a week to 32. Slice it any way you want: It amounts to a 20% pay cut.

I recall the conference call at Goofmart Pharmacy very well. The director started off by saying how proud he is of all of our pharmacists for how hard we're all working. Then he went on to say that big changes are two weeks away and wanted to assure us that the changes were in no way a reflection on the financial stability of the company itself.

Then he rolled out the plan: Cut the hours open at slower stores and reduce the staff pharmacist position to 32 hours a week. The floor was then opened for questions. No one had any questions because we were all stunned. I know my mouth was hanging open.

After years, YEARS of loyalty working for Goofmart Pharmacy, I'm now being told that my wages were suddenly being cut by 20%. Fear flooded by body as I realized that all my obligations... house payment, car payment, kids in college, bills to pay, and retirement were now all in crisis. I just sat there, in shock, as I'm sure everyone else was.

I've written before about how the market is flooded with pharmacists and I'm sure simple supply and demand weighs into this, but I'm more convinced that the profit of pharmacies everywhere, affected by Pharmacy Benefit Managers (PBMs) is also hugely responsible for this nonsense. Upper management signs off on deals for razor thin profits without thinking how it will really play out in the trenches. Based on all the other amazingly stupid ideas they roll out, I wouldn't be surprised.

My gut feeling, though, tells me that at my company this is more about taking advantage of a situation in the marketplace. Upper management saw an opportunity to stick it to the pharmacists simply because other companies are doing it. I can't go into details, obviously, but I can tell you that Goofmart Grocery implements and copies their competition, implementing new policies and procedures, only because the other grocery store is doing it.

And to me, that's just a stab in the back. Thousands of pharmacists, some with new families, others with kids in college, with house payments, car payments, and desperately trying to save for retirement have been stabbed in the back by the company they worked so hard for... hours upon hours up and beyond the 40 hours they've been paid each week.

I'm not alone. Look at this poll I ran on Twitter: 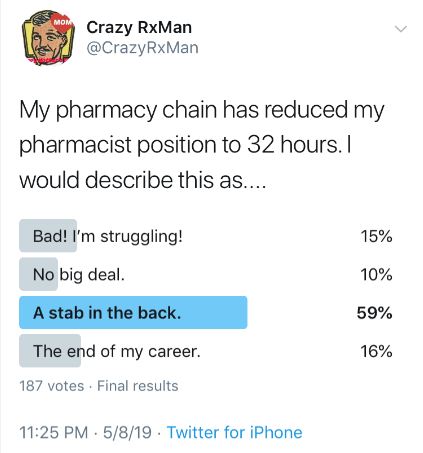 Almost 60% feel the same way I do: This is nothing more than a stab in the back. People are struggling with it, like me, and some of us feel like it truly is the end of our careers as pharmacists.

A few weeks after this new policy was implemented, the RPM was at my store for a routine visit and to tell us about a new gift card for transfer program. The new program was to give a $25 gift card for EVERY transfer... NO LIMIT. If someone has ten transfers, they get $250. No restrictions.

So I had to ask the RPM... how is it that the company has money to throw around for gift cards for transfers but had to cut pharmacist hours?

Upper management anticipated this question well in advance and she rattled off the chosen reply off her lips quite readily:

"It's to increase script count so we can get our stores up the amount of scripts needed to get the staff pharmacists back up to 40 hours again."

I could almost picture her in front of her mirror that morning practicing delivery of that lie.

I stared at her for a moment. She's become so accustomed to lying to people that her tell was almost imperceivable. But I guess upper management doesn't realize that we see narc addicts lie to us on a daily basis and we're experts at seeing lies. She could sense I was seeing through the lie and changed the subject.

I let her continue for a few minutes, then mentioned how I had personally noticed how the daily emails from the scheduler had increased as open shifts were listed everywhere. I asked how they were dealing with the crisis.

"What crisis?" she asked.

"I heard a lot of pharmacists have left the company in search of 40 hour a week jobs and there's a lot of chaos as others are scrambling for the hours that are left."

"Oh no. There's no problem. The change was well-received..."

And then she looked me straight in the eye and said...

"You're the only one that's complained about the hour change."

How one says such a lie is beyond me. Hundreds of pharmacists just had their pay cut by 20% and I'm the ONLY one with a problem with it? And she seriously expected me to buy that lie?

This isn't over, folks. In the next few weeks I plan to discuss what I'm going to do about it. Hopefully there will be enough interest with others to save our careers. One man alone can't do it, but all of us together CAN do something.