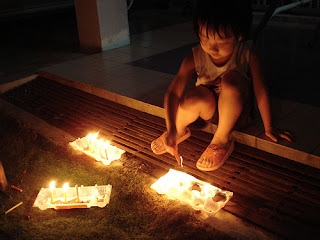 That's what it is, really. It's like a child with a box of matches. Fire is so very magical, the ultimate chemical reaction. When something burns it is amazing to a child... and just like magic. Yet, the child doesn't realize the inherent dangers. Fire is useful, but used improperly is DEADLY. And unsupervised, it's only a matter of time until the child gets burned playing with fire... or worse...

Such is retail pharmacy, especially those in grocery stores like my national chain. You have all these corporate muckity-mucks trying to run a pharmacy like a grocery store, or much worse, like a automobile manufacturing plant. Like a child, they lack the wisdom and understanding of what pharmacy is really all about. Oh, they say they understand, but the actions are much different. When you under staff a pharmacy, you're playing with fire... and its only a matter of time until someone gets hurt, just like with fire. When you push pharmacists to the limit of their physical endurance, its only a matter of time until a serious mistake is made and someone gets hurt, or worse, dies.

Profit is what drives any business, and pharmacy is no different. But what is different is the marketplace now. There is massive competition. Margins are thin. Grocers MUST decide whether they can handle the thin margins WITHOUT compromising patient safety. From corporate perspective, they're cutting tech hours left and right to increase the bottom line. It's a simple equation. That's the first thing they teach in you in business school... if business gets tough, cut the work force. But their calculations have failed to take into account the risk factor and what might happen... or rather what WILL happen, when you continue to push humans beyond their limits.

A colleague of mine works for another national grocery chain pharmacy. Awhile back there was an incident in one of their pharmacies where the wrong medication (methotrexate) was given to a baby with an identical name to that of the cancer patient it was intended for. Fortunately the error was caught early and there was no patient harm. The chain pharmacy immediately printed laminated cards with detailed instructions on how all pharmacy personnel are required to check name, date of birth, address, phone number, and medication for EVERY patient picking up medication. Every pharmacy employee was required to sign off that they would follow this protocol exactly and that the extra time needed to do this was fine with the company. These laminated cards were expected to be placed everywhere around the registers and even the input workflow computers. This is fine, but the people who designed these instructions really don't know what it is like at a busy pharmacy.

And once again, here is an example of a company not addressing the real issue. The error happened because the pharmacy was under staffed and overworked. Instead of addressing the real issue, they chose to place the burden solely on the pharmacists and staff... in other words, "don't blame US because you're under staffed, it's YOUR fault." Moreover, when a major mistake happens again, the company has conveniently placed a safety net for themselves... "Hey, we have a system in place to prevent that... it was the pharmacist's fault that the wrong medication was given to the patient... we regret that our perfect protocol was not followed... we're innocent."

Eventually there will be a busy pharmacy in my pharmacy chain, or one of our competitors... that has pushed the envelope too far. A baby will die, or someone will be seriously hurt. There will be lawsuits and news reports and the media will refer to articles and blogs like this one from pharmacists having sounded the warning call for years. The "perfect protocol" safety net will be revealed as a piss-poor way to handle the fact that the pharmacy was seriously under staffed. Then there will be huge settlements and payoffs... likely in excess of the money the company would have paid if they had just staffed the pharmacy responsibly and respected the pharmacists instead of working them to death. You would think that the corporate people would take that into account... but no, they'd rather roll the dice to save a few bucks on the bottom line. I'm sure at the top of their agenda is their bonus, not people's lives.

Please, corporate... wake up! Someone needs to take a stand, step up, blow the whistle. When you're dealing in healthcare, profit is the secondary motive AFTER patient safety. Otherwise, it's only a matter of time until someone gets hurt.
Posted by Crazy RxMan at 6:00 AM

these types of low level "interventions", e.g. writing a policy and having everyone document they read it, are known to be ineffective, but you know that.

do they not ever look at process improvements, failure modes, root cause analysis to rectify these situations? it's somewhat common in hospital and i know my BOP at least gives it lip service. is there no cross over in patient safety practices from hospital to retail?

if i was a pt harmed in the retail setting i'd ask these types of questions rather than take a settlement and let the rph/tech take the heat but i have the background to know what questions to ask.

glad i never decided on retail, i feel for all of you.

I have a co worker who worked at an under staffed pharmacy that did kill someone. Patients family took it to court. Just slaps on the wrists all around was the out come. And the lawyers tried to blame the technician, not the pharmacist in charge. I mean the lawyers for the pharmacy.

But, hey, it's just business right? Nothing personal, not like someone died or anything.

My company excels at being the reactionary company. We're NEVER the first to do anything. I doubt the company will be the first to actually address the real issue.

I was going to a big chain pharmacy but after them giving my infant the wrong medication and then acting nonchalant about the whole incident. A "I'm sorry" or "oh shit" would have sufficed but instead I got a " so.. You want the original one ?" Um, wtf?

And this is why, as a CPhT, I have my own personal liability insurance. I know my employer would try to throw both the pharmacist and I under the bus just to save their butts.

The problem eventually lies with the state board. Until they see the direct effect staffing has on safety there will never be a change. The rule of thumb that is posted on my BOP web page about volume and staffing is that the pharmacist is to be the judge of safe volume. Last time I worked for a chain (Walg*****) I had no say in either volume or staffing. Until only practicing pharmacists (not corporate managers who happen to have a pharmacy license) are the only ones allowed on the state board will this change.

Your blog was my education behind the scenes. We use a big store pharmacy. Somehow they lost a prescription for a powerful pain killer. Your blog gave me understanding that yes, they are human. Luckily my husband never asked his doctor for special favors. The pharmacy staff was very apologetic and it all worked out.