There is a Place for Conscientious Objection 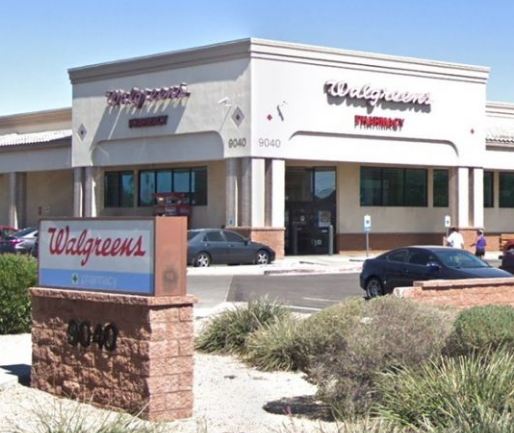 The story from Fox News:

An Arizona woman whose doctor told her she would miscarry said she was deeply upset after a Walgreens pharmacist refused to provide her with medication to induce an abortion because it went against his personal beliefs. 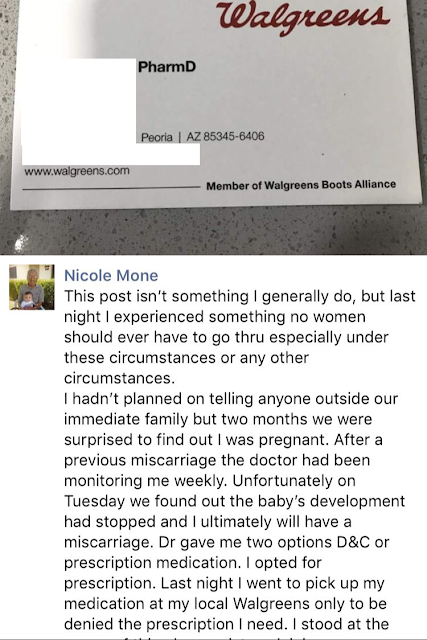 Nicole Mone took to Facebook Friday to explain that just days earlier, her doctor had said she was going to suffer a miscarriage.

"Unfortunately on Tuesday we found out the baby's development had stopped and I ultimately will have a miscarriage," Mone, who said she'd had a miscarriage before, wrote.

When offered the option of undergoing a hospital procedure or taking prescribed medicine, Mone accepted the latter.

The woman went to Walgreens in Peoria, roughly 13 miles northwest of Phoenix, to pick up her prescription, but said the pharmacist refused to give her the meds.

"I stood at the mercy of this pharmacist explaining my situation in front of my 7 year old, and five customers standing behind only to be denied because of his ethical beliefs," Mone wrote.

Mone, who said she "left Walgreens in tears, ashamed and feeling humiliated by a man who knows nothing of my struggles," said her prescription was transferred to another Walgreens across town, where she was able to pick it up without issue.

The mother said she contacted the store manager "who did not seem happy about what happened," and also reached out to Walgreens' corporate office. Mone said she also filed a complaint with the Arizona Board of Pharmacy.

Walgreens company policy, according to Fox 10, allows pharmacists to reject prescription requests if they have moral objections, but they're still required to refer the prescriptions to other pharmacists or managers on duty.

Walgreens in a statement said the company was "looking into the matter to ensure that our patients' needs are handled properly." See LINK.

In a moment I'll give you my thoughts on the matter. But first a little background:

I understand the situation all too well. Years ago my wife (at the time) and I went through the exact same thing. After having two healthy boys, we were excited to find out that a third baby was on the way, only to have that excitement completely destroyed when we found out it was not a viable pregnancy. There was no heartbeat.

In similar fashion the OB/GYN prescribed medication to end the pregnancy. When I initially gave the prescription to my pharmacist, he expressed concern about filling it, UNTIL I explained the situation to him. Then it was no longer an issue.

As a pharmacist I'm well aware of the medication and what it does not only from my education in pharmacy but also as someone who has lived through the same thing. So I'm VERY familiar with the issue, from BOTH sides.

There are a number of things that bother me about this story:

* The first thing that frustrates me is that as of now we're only hearing her side of the story and we have to accept that since the pharmacist has not spoken out that what Nicole Mone said happened then it did indeed happen as stated. 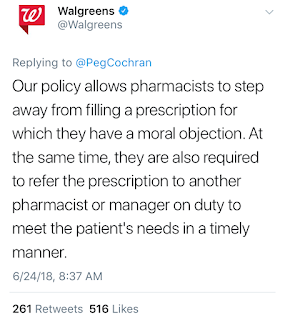 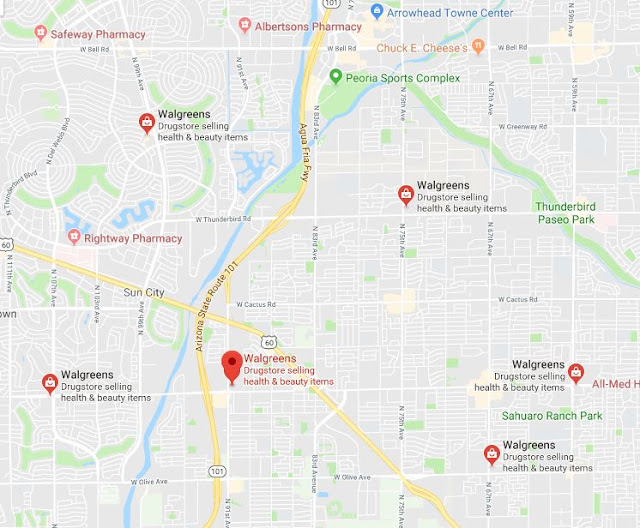 Two to five miles is not "across town." That sensationalizes the story to make it seem like the patient was really put out to fill the medication. I find that ridiculous.

* I have a huge problem with Ms. Mone publishing the name of the pharmacist that refused to fill the medication. With this story now having gone viral, I fear this pharmacist has likely received a number of threats and if he hasn't been transferred already, he will be shortly. He may even have to quit Walgreens and move. This kind of "revenge" is hateful, to say the least. Whether Ms. Mone knew her story would get the attention it did or not, publishing his name feels a lot like she's trying to extract revenge.

* There's this general idea out there that a pharmacist's job is just to blindly fill medication for patients without regard to any other issue. Add to that a huge number of misconceptions out there about "moral objection," the law, and the role of the pharmacist. Here's some examples: 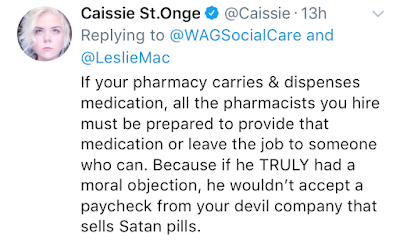 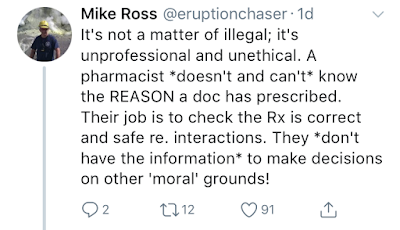 * Considering this story, there's other factors which bother me even more. People seem to forget that our country, THIS country, the United States of America, was founded on ideals of freedom, one of them being religious freedom (See LINK). The pharmacist is protected under the First Amendment to have his personal beliefs. Arizona law and Walgreens policy protect those beliefs WHILE allowing an option for the patient. The pharmacist followed protocol exactly.

Moral objection is a religious freedom guaranteed by the First Amendment. Suppose for a moment that this was about a viable pregnancy; that the patient was trying to terminate her pregnancy. In Pro-Choice circles that's considered her right. No rights are extended to the unborn baby. The pharmacist's Pro-Life stance would not even be considered. The "morals" of her "rights" are more "moral" than his "morals."

And that's a very dangerous thing, folks. When one segment of society believes that their mores are morals are more "moral" than others, then we're in trouble. Big trouble. Looking at the big picture, we can all step back and definitely say that certain things are unconscionable. Genital mutilation, beating women and children, slavery... anyone with any kind of moral compass will quickly say these things are WRONG, WRONG, WRONG. BUT it's not so easy when you're talking about whether an unborn fetus is a person or just a mass of tissue. It's reasonable to allow and expect that a certain number of good, intelligent, and "moral" people can and will therefore object to certain treatments for patients. These objections are endemic to a well-rounded society of FREE-thinking people unfettered by the mob-mentality that we're seeing in this particular case.

There is a place for conscientious objection: "The argument in favour of allowing conscientious objection is that to fail to do so harms the doctor and constrains liberty. This is true. When a doctor's values can be accommodated without compromising the quality and efficiency of public medicine they should, of course, be accommodated. If many doctors are prepared to perform a procedure and known to be so, there is an argument for allowing a few to object out." (See LINK).

This article goes on to summarize as follows:

So in this case, the pharmacist acted within his rights, Walgreens protocol, the law, and in my estimation, he acted appropriately. Sadly, this pharmacist and pharmacy in general is getting blasted all over the Internet simply for him invoking his First Amendment rights.
Posted by Crazy RxMan at 4:00 AM

Didn't you know? Only progressives have rights. All other people must submit.

No, I'm not being sarcastic. This seems to be the firm belief of "liberals ". They get quote marks 'cause they aren't very libral to anyone disagreeing .

I consider myself liberal & progressive and believe all people have rights. As the saying goes, “I do not agree with what you have to say, but I will defend to the death your right to say it.” Also, by listening to opinions contrary to mine, I learn different ways to see things.

As a former tech support worker I can say that people are out of control with social media. I can understand her outrage with the pharmacist, but a manager could have solved the problem before she even had to tell her story. Instead, she assaulted his character in public and leaves no way for him to defend himself. Looking at it from another point of view, how would she react if a pharmacist blindly hands out prescriptions without looking at them? We might as well just ask for pharmacy vending machines.

In my opinion it is not up to the pharmacist to question her correctly prescribed medicine. It is his job, and yours CRX, to dispense it in a safe and legal matter. Not to judge why she needs this medicine.

It is one thing to bitch about people trying to fill narcs early, I'm with you there. But this is not that scenario and none of your business why she needs it. If the doctor feels it's appropriate it is not your job to second guess that. If she was allergic or it was dangerous with another drug, than yes it is your job to question, but not why.

I vote with Anon at 12:15. We've got a culture in which being thwarted even slightly is cause for massive indignation which can only be revenged by blowing it out of proportion on social media. Yes, Ms. Mone was inconvenienced, but how often does she need the drug? I'm guessing infrequently and now she knows that if she needs that drug again, check whether it will be dispensed before going to the pharmacy.

Why tell her you had moral reasons not to fill it?I would just tell her we do not have it in stock . I do not talk politics or religion to patients due to reactions like this one. The pharmacist seemed to follow company policy and Walgreens got the medicine for her so she is making amounting out of a molehill.I hope Walgreens backs up the pharmacist.
There are some pharmacists I know who won't see syringes without an RX or proof they are on insulin.They feel ii enables drug use..Then there are some pharmacists who'll sell syringes (like me)who will sell syringes without conditions to prevent the spread of AIDS and hepatitis C.
There are many grey areas of pharmacy but patient health come first.

Hate to say it, but I have to side with the pharmacist on this one. I have worked for Walgreens and it was always, always understood that we can refuse a prescription at any time, for any valid medical or ethical reason (and document it)--a side effect of the opiate crisis, to be sure. A morally unacceptable thing would have been to leave the woman hanging and not refer her to another pharmacy that could service her prescription, but he did just that. I love how people who know next to nothing about our profession are suddenly entitled to crucifying this pharmacist who acted completely within his rights.

Yes the pharmacist has rights. Cut the mom a wee bit a slack here, though. This wasn't an acne prescription. Her.child.died. I think that might make a person just a wee bit high strung.

Misoprostol is used by men. I assume pharmacists question males' prescriptions as well??? Surely they don't only quiz women on the usage?

It's not the business of any pharmacist to question a prescription. EVER. NOT YOUR BUSINESS. You are not a doctor, sir. Get off your high horse and put the label on the bottle like a nice pill jockey.