But they FELL into my Cereal...

Mrs. Norco is a regular of ours. We call her one of our "Frequent Flyers"...  she's pretty much hopped up on Norco all the time. She knows the game and plays it well. She knows to request a refill on her Norco several days in advance giving the MD time to see the fax and respond.  And she somehow seems to know right when to show up when insurance will pay for it.

Mrs. Norco also has a tendency to take too much of her medication on occasion. She's gone through all the standard excuses that we don't buy anymore... such as it was stolen out of her purse, then stolen out of her car, then taken by her housekeeper, her kids' friends... a monkey that escaped from the zoo, etc. etc. Mrs. Norco has had to get more and more creative to get an early refill on her medication every time.

I think she was sensing our displeasure in hearing one lie after another, so the latest lie involved a bit of staging. She starts out her story by telling me that that her husband brings her a bowl of cereal while she is in bed every morning with her medications for the day. On this particular day she goes to open her bottle of Norco and "Theysa jus jumped all overs the place likes an ex-po-shun!" According to her, the majority of them landed IN her bowl of cereal. When I asked her why she couldn't just dry them off and still take them, she just looked at me. I don't think she thought ahead enough on this one. I was told no, that just wouldn't do at all. She needed a NEW Rx for the full quantity (despite the fact that you can see in the following staged photographs that there are at least 35 tablets perfectly placed around the bowl of cereal -- why she couldn't take these -- I don't know.)

Mrs. Norco was quite proud of being able to submit photographic evidence to both her doctor and our pharmacy as to why she needed an early refill on her happy pills. She was almost beaming when she showed them to me. I'm just waiting to see what she comes up with next time... 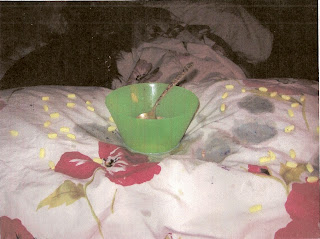 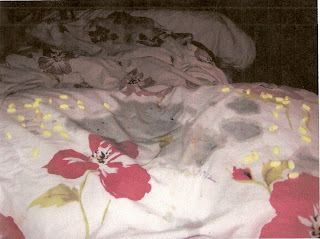 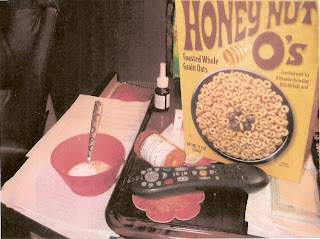 It's because the milk absorbed the Norco, thereby changing the bowl's color.

Seriously, is it not just feasible to say: "Mrs Norco, I have had it with your drug seeking behaviour and apparently neverending list of excuses, so this is how it's going to be from now on."

"If you want a prescription or a refill dispensed, you will have a current script. No excuses will be accepted, no relief given for disasters, and no exceptions made under any circumstances whatsoever."

"If you feel that you are unable to continue your association with this business on those terms, then we freely invite you to transfer your custom to another pharmacy and inflict your crap on them."

"Regardless of the outcome you choose to pursue, the current situation will no longer be tolerated."

I actually had that happen only with a glass of water in the middle of the night. Not Narco but antidepresson meds.... Lost about half a bottle. Really medication and clutz's dont go well together. Luckily i was able to streach them out a bit.

Came across this site by accident - work in IT and was looking for a minion pic (?) - hilarious with a smattering of sad social observation.

Keep up the good work.

Although UK based I used to work in Corporate America, a VP (Booo..!), so it struck a chord.

As I work at a major chain retail pharmacy, I have also heard it all. In fact, I can spot a " I have no insurance, I need to pay cash" person before they hit the counter. (Thank You PMP)
So Last week when about 75ish Ibuprofen 800mg fell behind my nightstand (our caps SUCK) I had to text all my coworkers to let them know. I got lots of funny replies. I know it's only Ibuprofen but one of the replies said "oh suuuuuurrrreee, you are on the Most Wanted List now!! Thank goodness it wasn't any other Meds and yes, they ARE still behind my nightstand. Maybe I'll Doctor shop for more Ibuprofen.