An e-Script appears for Jill Miller for Flonase. I fill it.

An e-Script appears for Jill Miller (from the same physician) for a Z-pack. I am busy taking care of other patients, so I don't get to it right away.

Jill Miller appears at the pick-up window asking for her Z-pack. I tell her I haven't filled it yet. She rolls her eyes.

Jill Miller is back at the window as I'm finishing up filling her prescription. I go to the will call and grab the Flonase, and then notice she has two other medications for a Flovent and Ventolin.

"I have the Z-pack, Flonase, Flovent, and Ventolin here for you. It looks like the Ventolin and Flovent are rather pricey," I tell her.

"Why is there a Flonase?" she asks.

I tell her that her physician sent that over in the morning.

"Ok, so here's the Z-pack, Flovent, and Ventolin. The Flovent is about $180 and the Ventolin is $63... ON YOUR INSURANCE," I say, emphasizing the insurance part.

"Is that with my insurance?" she asks.

"Yes, that's ON YOUR INSURANCE," I reply.

"Don't they cover my medication? They did before."

"They cover some of the price. Perhaps you have a deductible? It doesn't tell me that."

She sees the total on the monitor.

"Is this on my insurance?" she asks.

At this point I can't help myself. "Are you listening to me?" I ask.

I show her the cash price of the med on the pharmacy printout and then show her the numbers I've repeated twice now. "Your insurance is covering part of the cost, but not all. THESE are the prices YOU PAY," I explain.

I swear to you, by all the gods of Westeros, she then said:

"Is this with my insurance?"

I'm stunned. This lady was hit several times with the stupid stick today and I've really had enough. All I can muster out is "Yes." 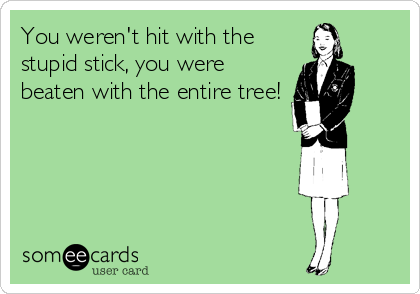 She was just overcome by sticker shock. Some people think because they have insurance everything should be free or a nominal fee. My neighbor is like that. Before she went on Medicare, she said Medicare was going to pay for everything. She has had a huge wake up call now that she is actually on Medicare.

I bet she has a history of traumatic brain injury.....Seriously.