Why Flu Shots are so Disruptive 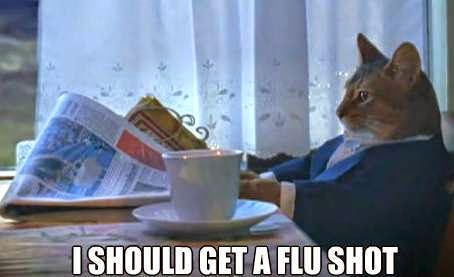 I'm all for vaccinations. I think everyone should get a flu shot. I vaccinate my children. I really do think you're much better off statistically speaking getting the flu shot. I just wish that my retail pharmacy wasn't so completely rabid about it. It's a cash cow for retail pharmacy, or at least it has been in the past few years. Now that everyone and their pet hamster is giving flu shots, we just don't know how the cash cow will do this year.

I even like the idea of pharmacists giving flu shots... under the right circumstances. But when The Authorities at corporate stick up big signs which say "Flu Shots Today" and "Get your flu shot anytime," there's where I have the problem. Call it bad luck, a twist of fate, or voodoo, but I'll be danged if people don't show up for a flu shot at the WORST POSSIBLE TIME. 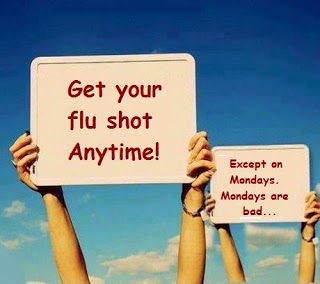 Why: It's Monday, the pharmacy day of hell. Everything happens on Monday. New scripts, refill requests, orders not filled over the weekend, a huge inventory order to handle... this all happens on MONDAY.

Time: Right when the pharmacy opens

Why: We have a bunch of crap to get down right when we open the door. Computers need booting with a bunch of passwords, the automatic refill is staring at us with that come hither look, and reports need signatures and filing. First thing in the morning is a nightmare for most pharmacies. Add a flu shot into the mix and chaos ensues.

Why: People get this great idea in their head ~ "I'll go get my new script filled at my pharmacy during lunch! It will be easy because no one will be there. I'm so smart!" ~ Unfortunately, everyone else has the same idea, including people that think they'll stop by the pharmacy during lunchtime and get a flu shot. It's also when doctors (who actually get a lunch) clear out their refill requests that pile up on our fax machine and e-script queue.

Why: See above. EVERYONE is picking up their prescriptions on the way home from work. Sure, I'll just pop in for a quick jab, right? All they have to do is poke me in the arm, right?

Time: Right after the last tech leaves for the day

Why: Now everything is left for the pharmacist to take care of. New scripts, prescription pick ups, the phone ringing, people with questions, end of day reports... all kinds of crap that we take care of at the end of the day, all alone, with no help.

Why: The pharmacist is tired. We've had enough. We want to go home. The LAST thing we want to see is someone come by 15 minutes before closing and ask, "Got time to do a flu shot?"

But what is it about the flu shot that makes pharmacists cringe? Here's some possibilities:

1. Most people that want a flu shot are first time patients at the pharmacy. That means we have to add them into the system, get their insurance, have them fill out the paper work, run a claim, and print a label. This process takes much more time. The Authorities want you to believe that it is isn't any different than a new prescription drop off. Oh, that's so wrong. You don't ask patients to fill out a consent and release form every time they drop off a new prescription.

2. And then there's the slow patient that takes FOREVER to fill out the paperwork. We try to streamline it as much as possible. "Sign, date, and answer 1-8." I even highlight the portions in red. Almost every time they don't listen ~ almost every single time.

3. THEN we have to give them all the paperwork, get payment, or have them sign out the "prescription." If someone is at the pick up window (because it took the flu shot patron FOREVER to fill out the form) we have to kindly ask them to move. They never want to move and roll their eyes.

4. THEN we need to get them into the waiting area, try to finish up anything else pressing in the pharmacy (like the person that was waiting with their eyes permanently rolled into the back of their skull), and head to the waiting area to do the flu shot.

5. THEN there's always the questions about the flu shot after we've already given it. Oh they could have asked anywhere along the way, but no, let's save that question until after it is too late.

It doesn't really take that long to do the actual flu shot part. It's the people part that gums the whole thing up. New patients, people who don't have their insurance with them and want to call their spouse to get it, people who get mad if they have to wait a few minutes, people who insist it should be free when we're getting a co-pay on our end, people who can't line up in the correct place, people who yell at us because their insurance wants them to get the flu shot at their doctor's office... it goes on and on. Add to that a corporate attitude of distrust, and we're all just screwed.

What would be the best way to handle it? Let each pharmacy manager decide when is the best time to give flu shots for his/her store and arrange to have all flu shots given during this time. Overlap time of pharmacists, 1pm to 5pm, or whatever works for that particular pharmacy, NOT "anytime."

As a tech for a retail chain, I politely tell my patients "Anytime during pharmacy hours, but the best times are..." I am not sure if it is working but I feel better about trying to avoid patients coming in when the pharmacist is alone.

I completely agree with everything you said except this

I know pharmacists, especially those at chain pharmacies, work most shifts straight through without real breaks but so do a lot of doctors. Like you said, a lot of Rx's come through around lunchtime that means they're in their office juggling paperwork, phonecalls, refills, patient messages, reviewing results, and grabbing a bite to eat all at the same time. I'm sure that doesn't go for every doctor, but most companies and hospital systems push their providers.

The single fly shot anytime is not that big a deal. It's the family of 4 that wants them during drive time that bothers me

Already said by anon3:26 but if I,a doctor, actually get lunch than why am I using it to send in scripts, review labs/radiology results, review notes from other doctors, see the add-on 'urgent' patients, finish notes from the morning, answer phone calls, and go thru a million useless letters from the insurance company telling me I hadn't done stuff that I had actually done(and that they paid for so they should have known). This is of course all off the clock at ' lunch' and after afternoon clinic as we don't punch a couch.

It really is inconvenient. Those annoying people handing their money to the store should be considerate enough to avoid pestering us during inconvenient times; Before 10am, between 11 and 1, between 4 and 6, AND after 8. Also, never on Monday and you forgot to add weekends because staffing is light, days the overlap pharmacist is on vacation, the tech is sick, or the computer is running slow. GROW UP. The woman that is asking you to poke a hole in her is usually just as busy as you. Let a second generation pharmacist tell you what my father said, Thats why its called EARNING a living. If youre not happy earning their business, get out of the way. Theres also a line behind YOU!

You've missed the underlying problem entirely, It's not the people that I have a problem with. It's The Authorities that added the flu shot business to an already overworked HEALTHCARE situation without additional technician help or letting us manage the flu shot business according to our location's needs.

In pharmacy, we EARN OUR LIVING protecting the patient. Adding the flu shot business distracts everyone in the pharmacy from that job.

If you actually worked in a pharmacy for any period of time that would become very obvious to you. I'm sorry you didn't get it.

One other thing... no one is handing ME any money. It goes to the same Authorities that said they could come in "anytime" to get a flu shot.

And in reality, most people don't pay a co-pay now to get a flu shot. It is covered on their insurance. To them it is "free."

What actually happens is WE hand THEM a 10% coupon for groceries, which is a huge driving force for people to get a flu shot in the first place.

So from the pharmacist/technician viewpoint... flu shots are a workflow nightmare that disrupts our ability to provide safe healthcare to the patient. The patient doesn't care about that. They just want their damn flu shot and coupon. The Authorities don't care because they want the grocery business regardless of how it overworks the system.

Dear CRM, I have read all of the above about vaccinations. You need to know one thing. I've got your back. And so do thousands of other pharmacists.

Amen. The problem is that the "authorities" market it like I'm just sitting there with the needle ready to go waiting to give them a shot. People don't understand that there is paperwork involved as well as billing their insurance....and that there might people ahead of them waiting for actual prescriptions.