I Swear You Can't Make This Stuff Up

A lady with two daughters, one age 14, one age 12, comes to Goofmart Pharmacy for flu shots.

The 12-year-old is already crying. This is going to be fun.

"We need to get flu shots," mom says.

Mom starts filling out the forms while I process the claims. People are starting to line up at the pick up window. Thanks to the incredible brain trust known as The Authorities, we don't have any extra help even though our workload is increased during flu shot season.

I run down to the pick up window and the first person in line is a new patient picking up an antibiotic. I had the prescription ready to go. I just needed the correct billing information. She hands me a card and I quickly type it all in. I have sausages for fingers but I'm quite nimble on the keyboard. Naturally, it doesn't go through on the insurance card she handed me.

"Do you have a separate card for prescriptions?" I ask.

"Nope. That's all I have. I just came from the doctor's office. They used that," she replies.

"Yes. This is your medical card. You must have a separate card for your prescriptions."

"I'll have to call and find out, but right now I have to do these flu shots."

The lady rolls her eyes and says she'll do some shopping. How kind of her.

So flu shot lady comes up with her very calm 14-year-old and a 12-year-old bawling brat.

"I wannnnnnnt FluMissssssst," she blubbers out with tears rolling down her face.

I get them signed out then ask them to wait in our expensive waiting room. I help another lady at the register while the insurance card lady strolls by and asks me if her's is ready. Really? It's been like five minutes.

I get the shots ready. Mom and daughter number one are incredibly impressed with my gentle flu shots. If there was a contest, I'd win first prize. I'm King of the flu shot jabbers. All hail to the King. 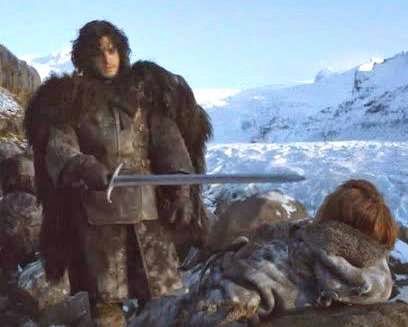 Then the blubbering, bawling 12-year-old comes in. Mom holds her hand. She blubbers harder when I roll up her sleeve. I inject her has gently as I can but she makes a scene like I just stabbed her with Jon Snow's Longclaw.

"I wannnnnted FluMissssssst," she belts out, one last time, holding her severely wounded arm. Oh, the humanity of it all!

I swear you can't make this stuff up.

What I wanted to say: "And this year's overacting award goes to... 12-year-old."

What I did say: "You're going to feel really silly about this later."

I step back into the pharmacy where insurance lady is standing at the pick up window staring at me.

"Did you get that insurance thing fixed?" she asked, like I was just in the magic "insurance fix it" room.

I swear you can't make this stuff up.

I tell her I haven't even had a chance to call and step over to the phone. I call her medical insurance people and they direct me to her pharmacy benefit manager because THEY DON'T HANDLE her prescriptions. I get her pharmacy insurance, process the claim, and head toward the register.

"Your pharmacy benefits are provided by ESI," I tell her. She looks at me, not the least bit embarrassed or sorry in any way and says, "Oh, you mean this card here," she says, pulling out her ESI card. She tries to hand me the card NOW, after I've already processed the claim.

I swear you can't make this stuff up.
Posted by Crazy RxMan at 4:00 AM

That 12 year old is going to be the one who's turning up at their doctor demanding prescriptions for whatever drug with a very fancy ad that vaguely implied it could be of use to them in a decades time, ins't she?

Phobia my behind. Lots of us are afraid of pain. It's called suck it up already.

He isnt makin fun of a kid with a phobia of needles. He is commenting on the problems we deal with every day when vaccinating kids. All kids are afriad of needles and cry. I had one start sobbing as soon as wiped her arm with alcohol. Its kinda tough to do a good job when the arm is jerking and could rip away at any second.
The kid who doesnt cry and whine about getting shots is the one to worry about. That kid will be the next Jeffry Dahmer, Ted Bundy or Marilyn Manson (and yes I do mean Marilyn).

This mom comes in with two boys, 9 and 7. The nine year old is crying and sniveling. When the time comes for their flu shots I figure that the loud one should get it first. I have him sit on his mom's lap and have her pin his arm against his side. As soon as he sees the needle he starts screaming at the top of his lungs, the whole store is echoing with his yelling. But the moment I inject the vaccine he gets quiet.

As soon as I put on the band-aid, he turns to his brother and says, "That wasn't nothin. You aren't scared, are ya? Are ya?"

I am amazed at how many board-certified MDs read your blog and identify and diagnose phobias!